When it comes to tactics in soccer, there’s no better expert to turn to than UEFA pro level coach Manuel Baum. Benefit from his expertise and become a tactical genius yourself as he shows you how to successfully attack and defend in a flat 4-4-2 formation against a 4-2-3-1.

When in possession of the ball, your 4-4-2-team is outnumbered by the 4-2-3-1-opponent in the middle. But you have more defensive players than the opponent has attackers. As a result, flank play seems to be a promising option in this set up, since it’s easier for your team to outnumber the opponent.
When your opponent is in possession, your defenders still outnumber their attacking players. Up front your strikers face an equal number of defenders. The bad news: In the middle you’re still outnumbered. So this is where your players have to move and shift strategically. Your aim is to force the opponent to the outside and thereby limit his passing options. It’s also important, that your strikers (or at least one of them) move back. If possible your midfielders try to double team the opponents wing player as soon as he gets the ball. 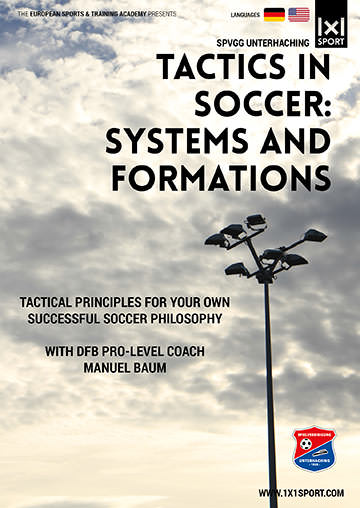 TACTICS IN SOCCER: SYSTEMS AND FORMATIONS

TACTICAL PRINCIPLES FOR YOUR OWN SUCCESSFUL FOOTBALL PHILOSOPHY

The perfect guide for developing your own soccer philosophy. Learn everything you need to know about the most efficient systems and formations in modern soccer. Instill the tactical principles that are necessary for your team to become more successful. Be prepared for any situation and for any tactical strategy your opposing coach might come up with. In-depth explanations provided by a German tactical mastermind.